I had the opportunity to tee it up at Tom Doak’s Montana experiment in September 2016. Without really knowing anything about it, other than the fact is was supposed to be nice, we took the trip down from Whitefish, Montana for the day to play.

It’s a good thing we tee’d it up here, because Cattle Co. is something else, and you recognize that from the moment you drive through the gates (which aren’t really gates, more like a fence to keep the cattle in).

The first hole is a fairly normal par 4 with a bunker in the middle of the fairway that seems to be a principle nose. 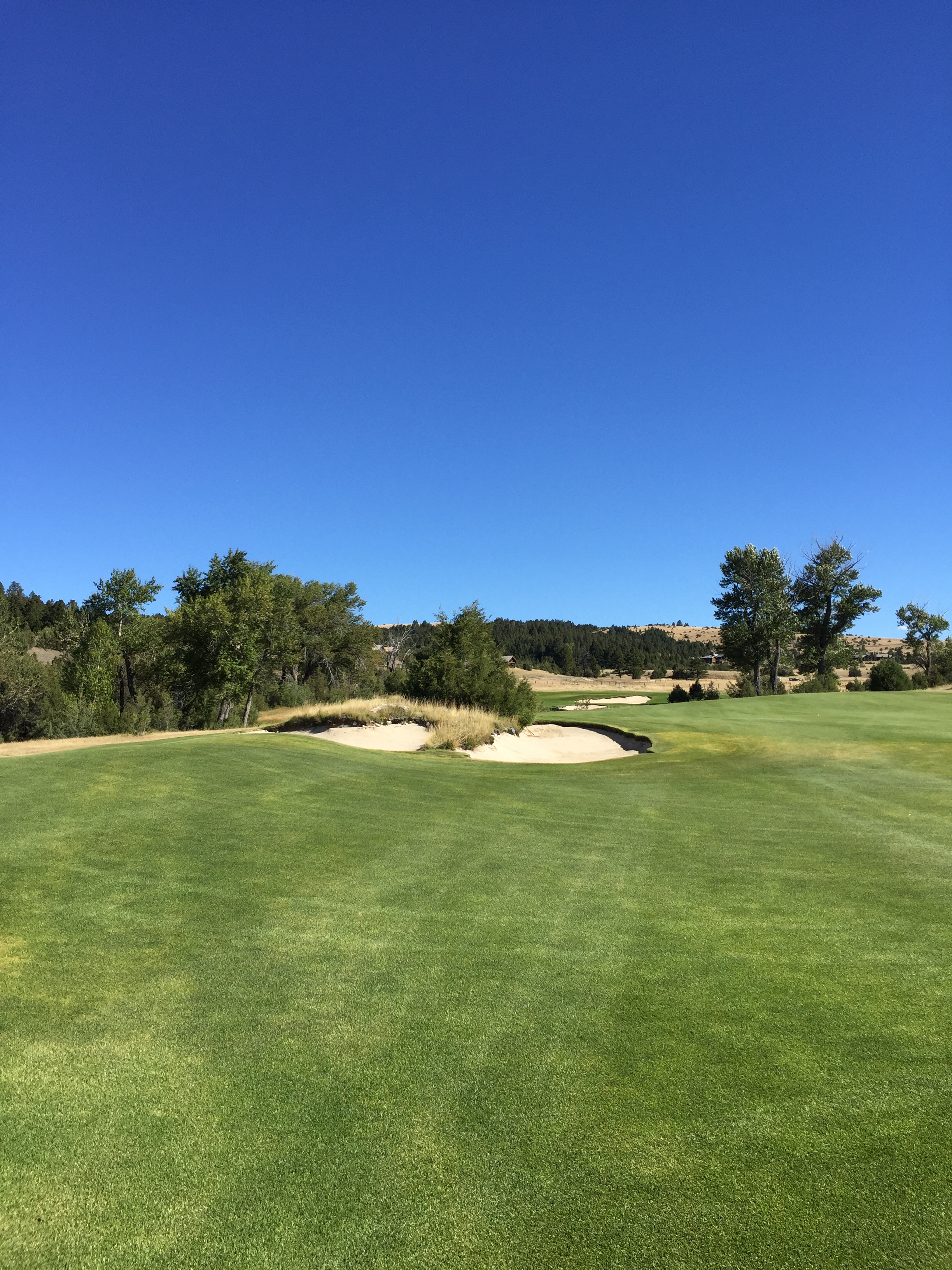 From the middle of the fairway on the par 4 opener

The second, a stout par 4, measuring close to 480 yards, feels pretty tight on the tee, but is actually a massive fairway. A pretty neat tee shot that you should focus on where the pin is. If it’s on the left, you’ll want to play to the right off the tee (and vice-versa).

The tee shot at the 2nd

The fourth, the first uphill hole on the property, is actually executed wonderfully. No one really likes an uphill hole, however, Doak and co. do a wonderful job of not making it too penal and gruesome, regardless of what the almost 460 yardage says. I wish I would’ve got a picture of the green, because it was almost punchbowl-esque, with both sides and the back funnelling in, making the mid-to-long iron approach easier than it looks.

The uphill 4th. Unlike usual uphill holes, this is a joy to play and feels like a good use of the land.

While the uphill par 4 5th, with its strategic tee shot that should hug the right to get a view of the green, and the mogul-like fairway on the 6th that can give you all sorts of lies are good holes, the 7th is one that has to be among Doak’s best two shotters.

487 yards on the card, the hole is bunker-less, with a semi-blind tee shot with an aiming rock out in the distance, and a spectacular green site wedged between two hills.

The cart puts into perspective the scale of Doak’s masterpiece.

After the all-world 7th, we move to the 8th, which is arguably the most photographed hole at Cattle Co. The par 3 plays over and next to the stream that menders around the course–particularly the back nine. The green is severely slanted towards the stream, making an uphill putt on these slippery complexes a difficult task. Throw in Doak’s infamous crazy green movements and slopes and you have a hole!

Owner Bill Foley thought the 8th was so good he decided to hide his own directly to the right of the green, over the stream, looking onward.

Making the turn, one notices that the front nine measures over (!) 3800 yards. The total length is 7466 yards, and while that may seem a lot, the conditions of the course and Deer Lodge’s elevation of almost 5000 feet above sea level help the course play shorter.

The 10th, almost unanimously said to be the best hole on the course and maybe the best hole in the state, is a spectacular par 5 that is the best three-shotter I’ve played thus far. Playing 632 yards, the prevailing wind is usually from behind, and plays slightly downhill. This is risk-reward at its finest.

The first round we played, it felt like a fairly intimidating tee shot with a massive bunker complex cut into the left side in the landing area.

The reality, however, is it’s a fairly generous tee shot. The bunker in the far right side of the photo (above) is approximately where the right side of the fairway is, however it does make the angle into the green difficult and much longer. 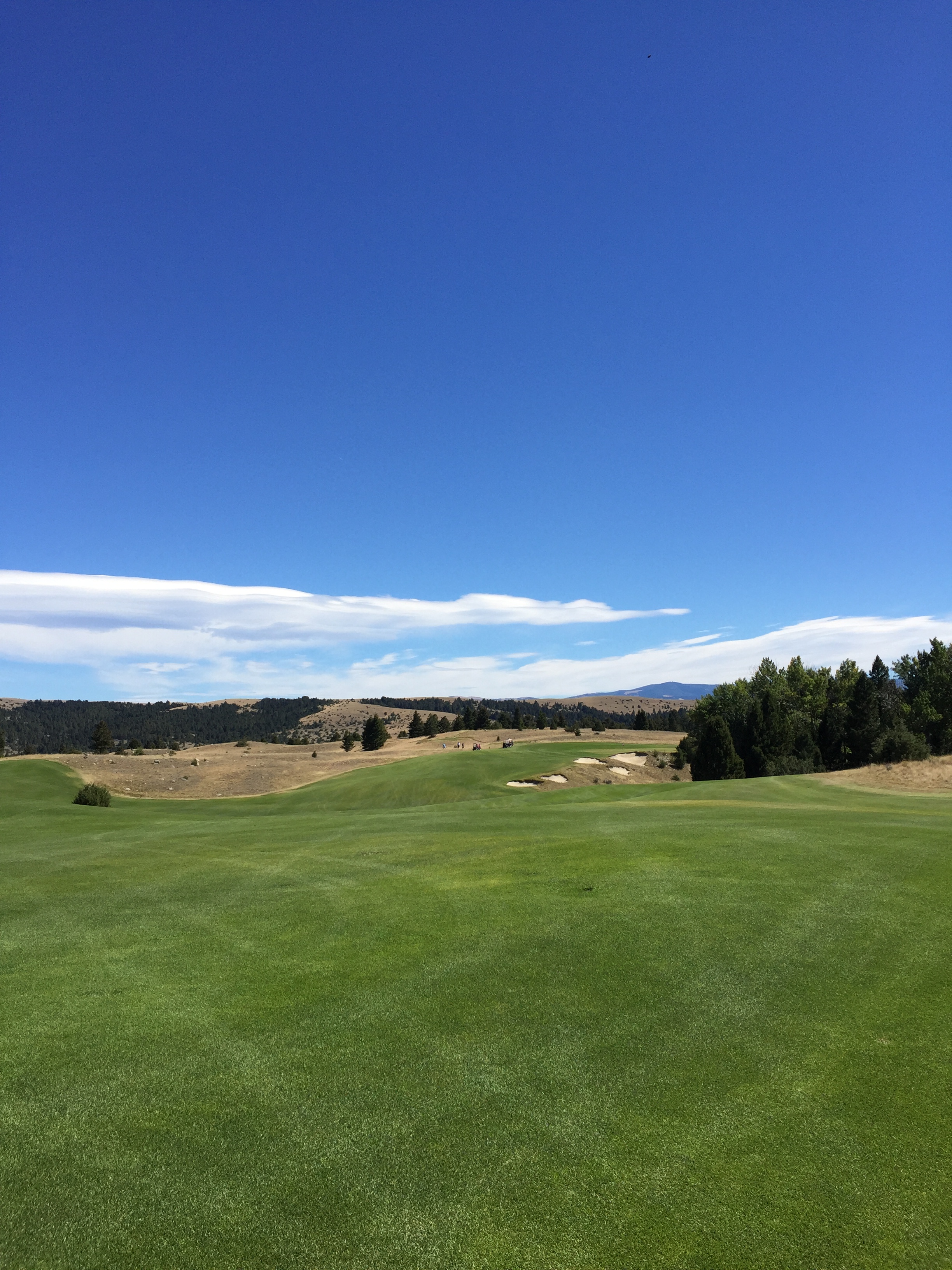 From the middle of the fairway on the 10th

A good tee shot sets up a chance to go for the green in two (yes, at 632 yards, it’s reachable!), and you can bail out left and watch the ball kick towards the right. I found that the layup would actually be harder, as you have a pretty difficult wedge from the bottom of the depression area up to the green, but there’s so much room to the left that if you’re uncomfortable with going for it you could try and find a flat lie.

Looking back behind the 10th at the topography the hole covers

The 12th is a short par 3, 155 yards from the back tees, to be exact, with a very big green and deep bunkering surrounding it.

This is a really fun hole and with different wind directions, it could really cause headaches standing on the tee trying to pick a club to get to the right section of the green.

The 14th is similar to the 7th, another great par 4, but instead of doglegging to the left like the 7th, the 13th doglegs to the right and plays more downhill. It is also considerably longer, playing at 550 yards and as a par 4.

I actually really liked the strategy involved with this hole. The first round, I hit it a little too far left and was faced with a semi-blind approach (and fully blind to the pin that day), while the second round I hit it father left and had a good view of the green. 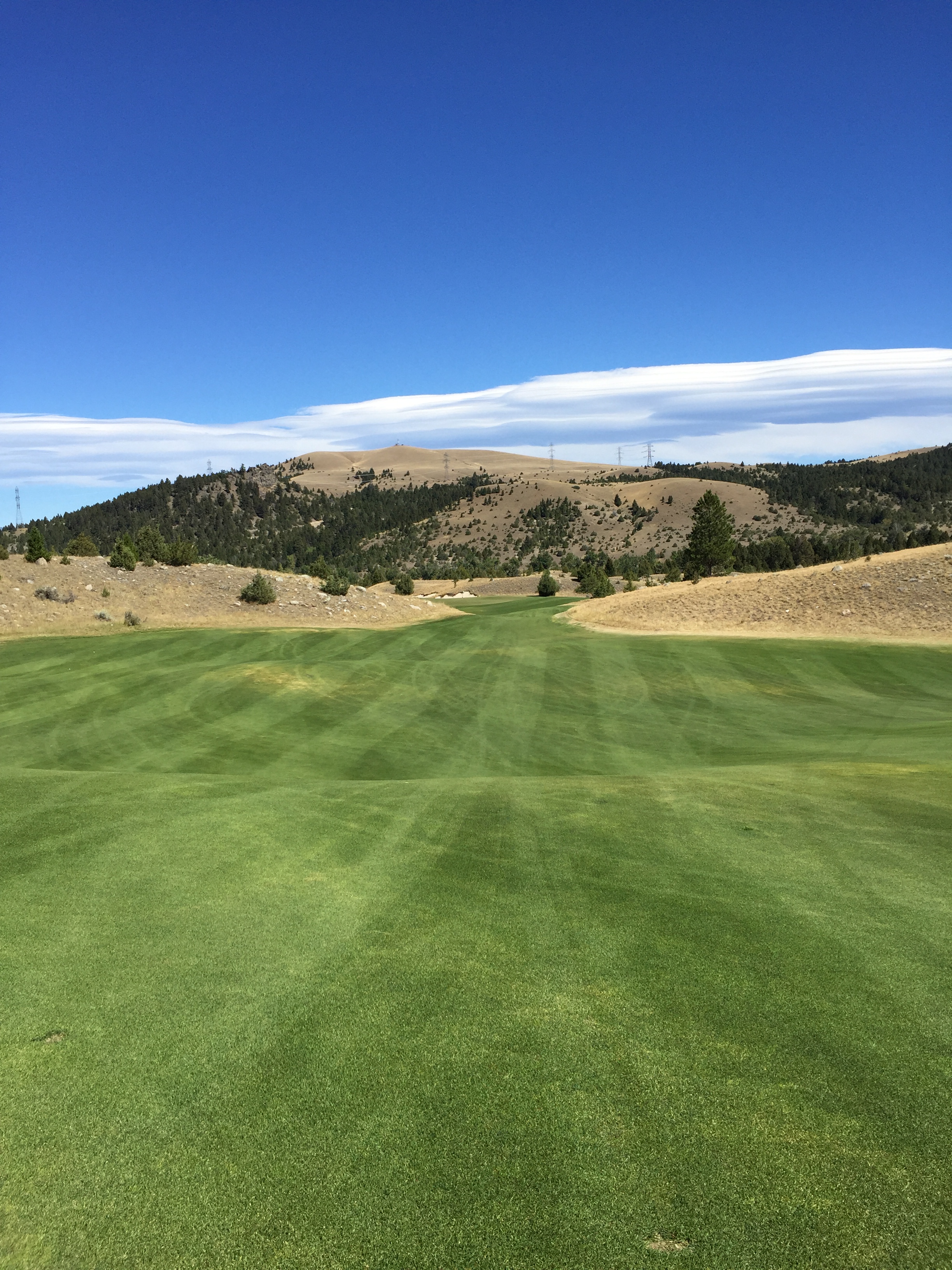 The approach from the middle of the fairway on the 14th

After the monster that is the 14th, you go to the 352 yard par 4, 15th, which, I guess in theory, is drivable since it usually plays slightly downwind, but there is 9 bunkers and as usual with Doak, they are exactly where you need to hit them so I laid up both times. Below is the view from multiple tee boxes. 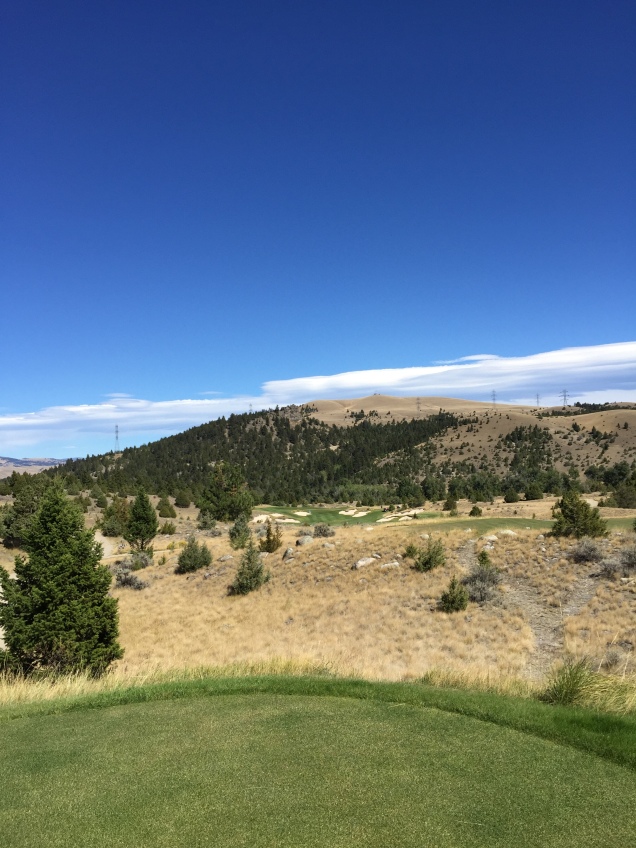 From the fairway it’s a fairly straightforward wedge but the green has some really cool green movements that, depending on the pin, means you could see your approach go in!

The 16th seems to follow Rock Creek’s trope of typical, all-world long par 4’s. This one, however, plays uphill, unlike the 14th and 7th, but still plays close to 470 yards. 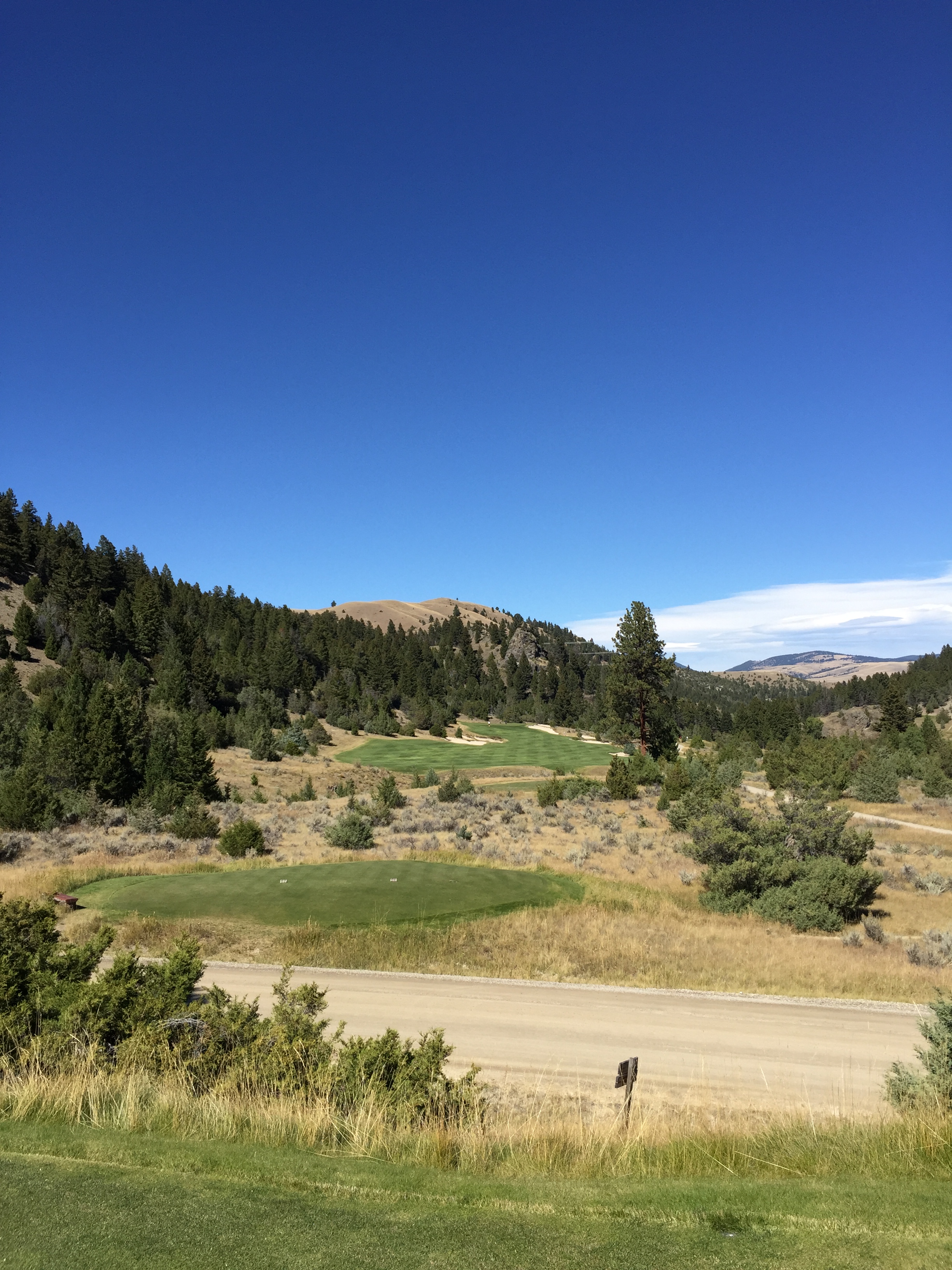 Looking up the 16th from the back tee shows Rock Creek Cattle Company’s teeth.

The approach was probably my favorite on the course. The green (and the whole hole, actually) is sloped off the mountain on the left, and creates some pretty crazy lies. Throw your ball up the left side on the tee shot and the approach and watch it come down!

The 17th crosses the same creek hole 8 did, and plays at a similar yardage (191 yards), but this green is considerably bigger and the green is significantly more undulated. This is one of Doak’s craziest greens that I’ve seen, but sure makes for a great 3. 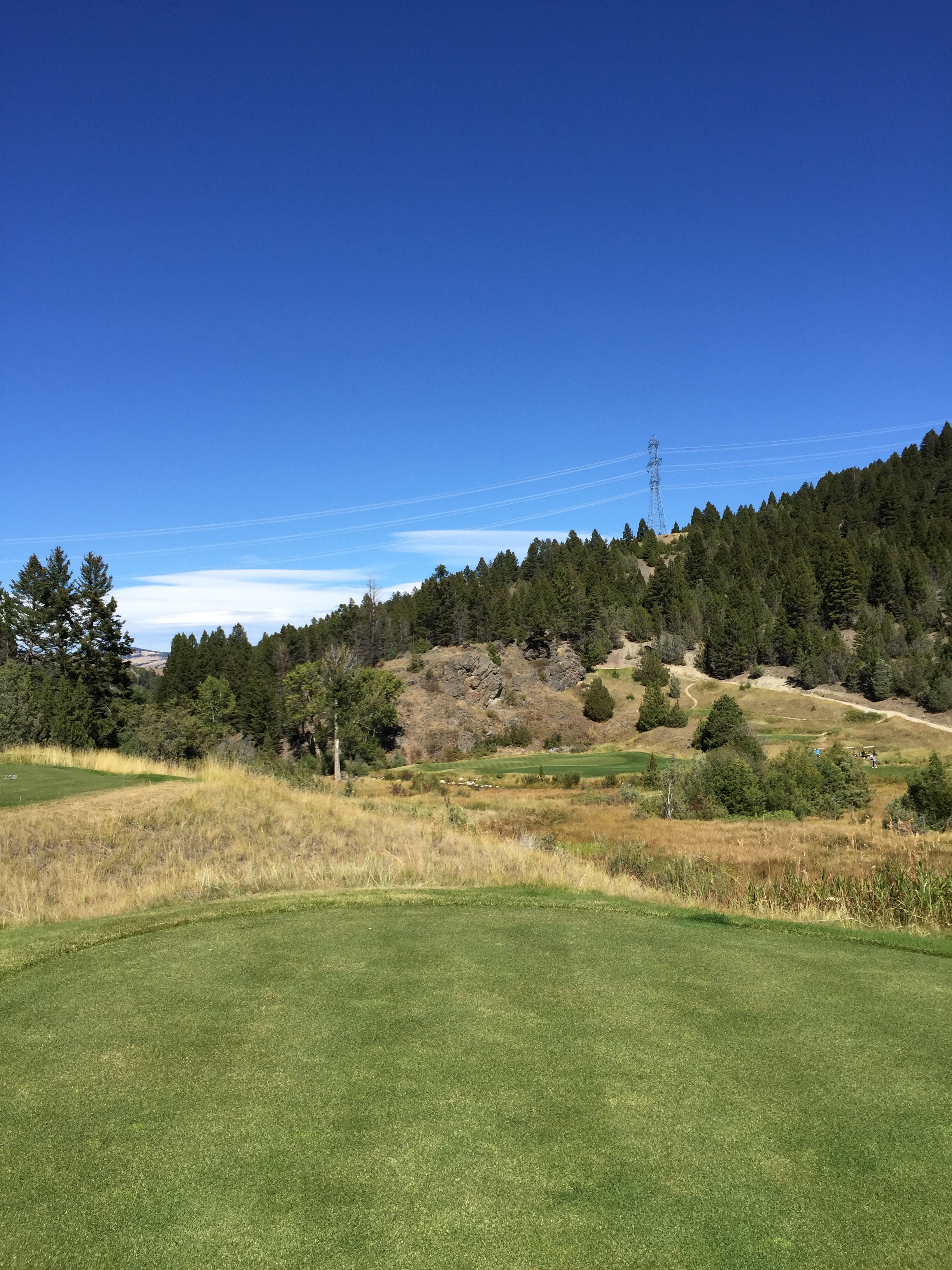 The spectacular par 3, 17th, the penultimate hole on a fantastic golf course and a great 4 hole finishing stretch

The 18th is a par 5 finisher that hugs the creek all the way on the left. You climb up the mountain seen behind the 17th for a sweet final tee shot that offers a lot of room to swing freely.

The final hole is pretty straightforward, but is still a nice finisher. Doak is currently moving the green complex closer to the creek on the left, which will add interest to the approach shot, especially if you’re tying to get home in two. 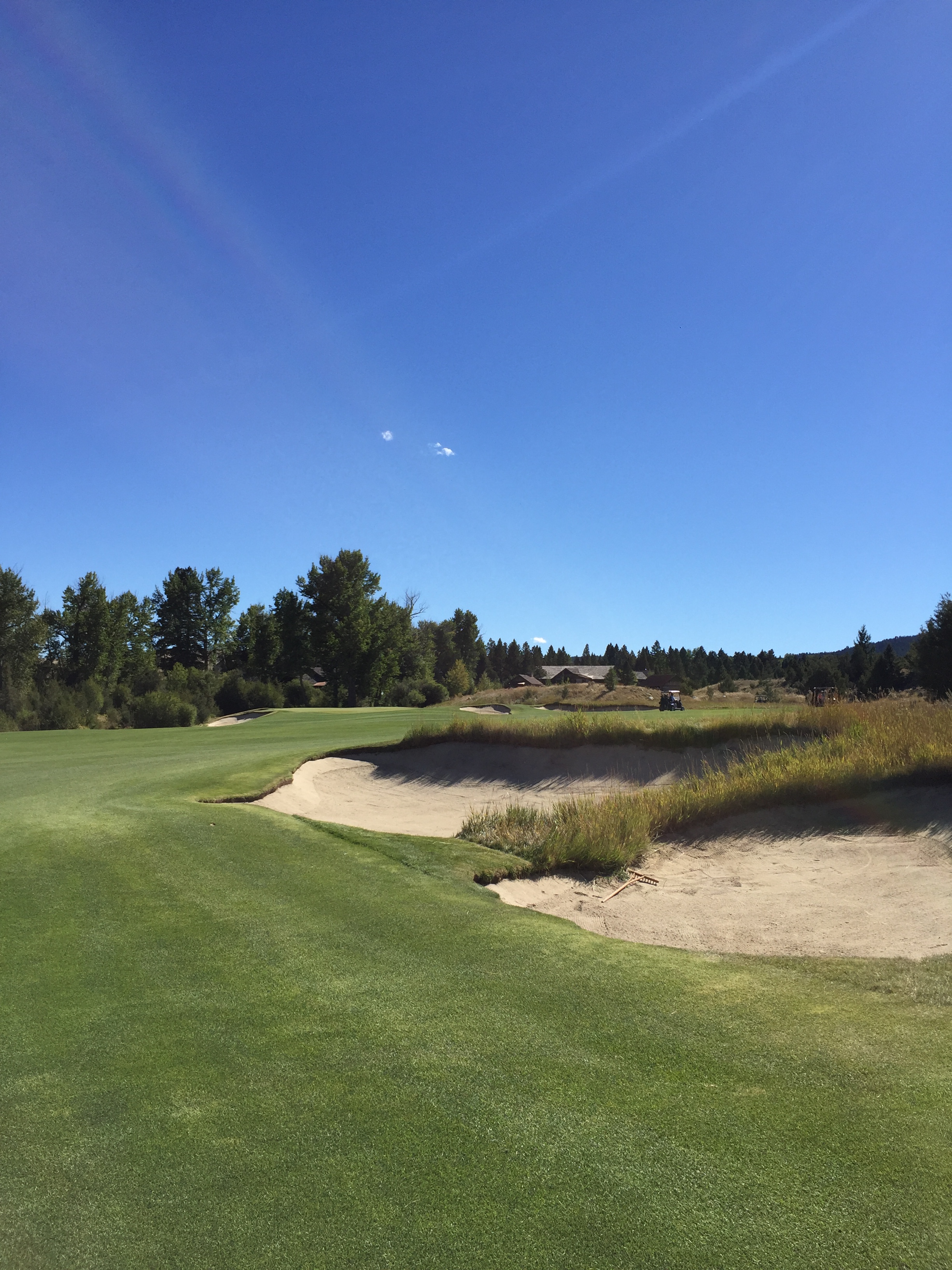 Rock Creek Cattle’s final approach makes you wanna run to the 1st tee and play it all over again (which is exactly what we did!)

Rock Creek Cattle Company’s is no doubt a fine golf course and a wonderful experience. There’s something about seclusion in the West that is tough to beat. It’s tough to see a flaw with Doak’s Montana experience, and is worth the trip at least once (maybe twice!). It’s been almost two years since I played and I still remember it like it was yesterday.